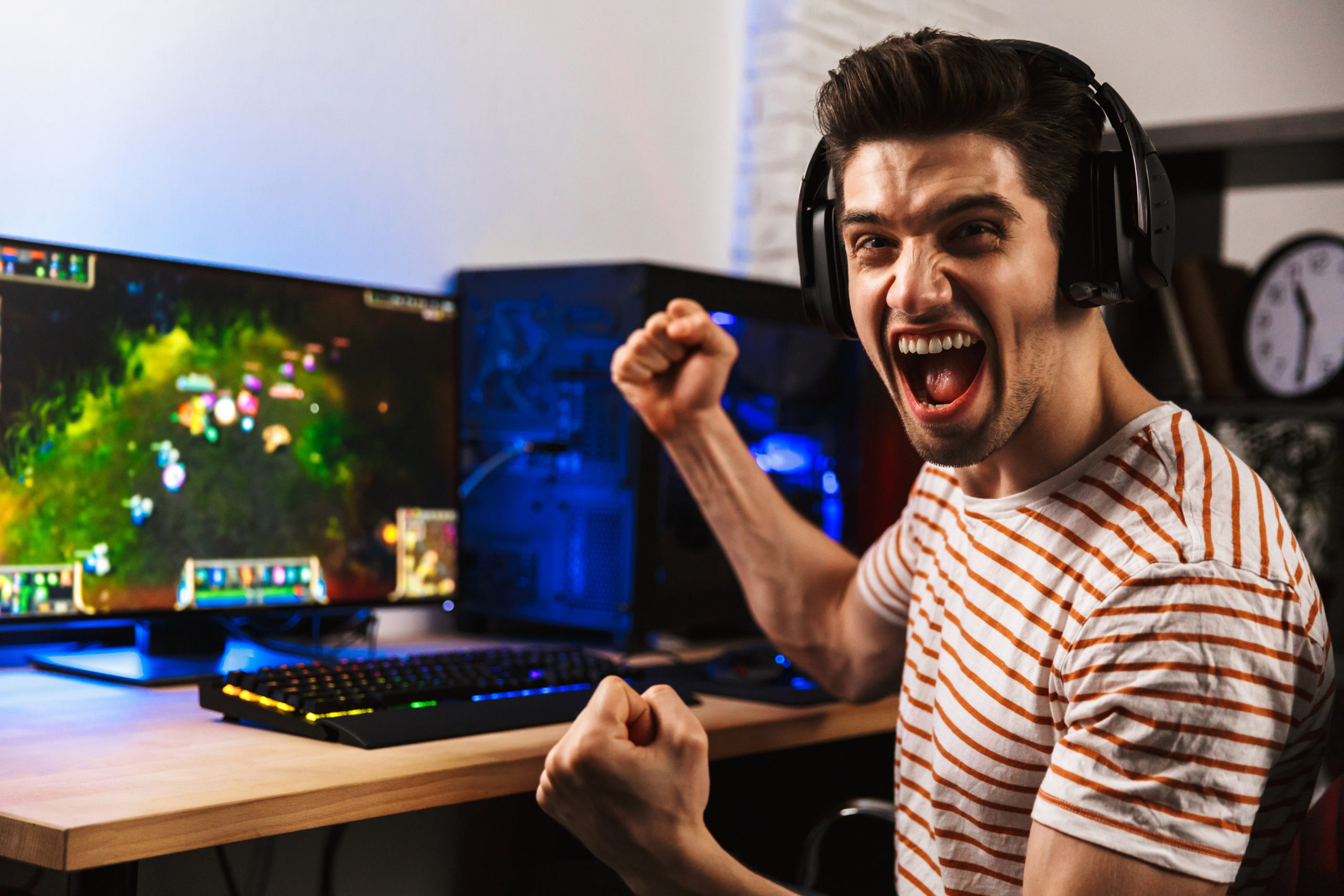 Gamers and Video Games—Who’s playing whom?

In video games, you explore unfamiliar worlds and experience intricate stories. There are always new things to discover, vast places to conquer, and different characters to meet. It’s a whole different sphere; no wonder the gaming industry in Australia is now worth $3.4 billion. We love video games! And with varied games like Minecraft, Candy Crush, and Fortnite, it’s enticing to get lost in a world of gaming. But what if the game is playing you?

You might be surprised to learn that Australian-made video games have been topping charts all over the world. You’ve probably heard of the Australian-made games Fruit Ninja and Crossy Roads. Our video gaming industry has been around since the early 1980s with pioneering games like The Hobbit.

Today, it’s a billion-dollar industry with 83 percent of its income generated overseas, employing at least 1,500 Australians in product development alone. You’d think it’s mostly coders and programmers but it’s very much a creative field too. There are producers, narrative writers, music developers, and even esports and retail components to consider. That’s a lot of jobs for us. In fact, according to a report from tech giant Lenovo, about 60 percent of Australians between the age of 16 to 45 say that their dream job is in gaming.

As much as some people aspire for a career in gaming, some Australians have only realized their love for gaming during the COVID-19 lockdowns. You might even be one of them. Have you finally gotten around to trying that game your friends have always been talking about?

Whether it be building worlds in Minecraft, plotting your heists in Grand Theft Auto V, or fighting crime in the city of Spider-Man: Miles Morales, you might be one of the more than 762,000 Australians who discovered their love for gaming recently.

The tech company Dell’s gaming brand Alienware found that one in ten Australians discovered gaming as a hobby in 2020. With stay-home restrictions, Aussie gamers now spend six hours per week playing video games. Alienware says that gaming “... generally had a positive impact in helping to manage mental health and relieve the isolation felt during social distancing.”

Here are other tidbits from the study you might find interesting:

Why do people play games? As the study has found, gaming keeps your mind occupied, helps you socialize, and even relieves stress. But gaming has been a popular pastime all over the world even before the pandemic. So what is it that people find in games that keep them coming for more?

Basically, we like to play games because it gives us a sense of fulfillment, it brings us close to other people, and it immerses us in a different reality where we have a better sense of control.

As a 2006 study put it, we like playing video games because there’s (1) an achievement component where we need to advance in the games through its rules, even wanting to compete with others, (2) a social component which, as it name suggests, is how we form connections and see ourselves as part of a group in a game, and (3) an immersion component where we customize our characters and create our own unique stories in the game, essentially escaping from real life.

Studies have also found that video games bring us enjoyment and relaxation. It’s fun! Why else would you hunt down the last remaining outlaws in Red Dead Redemption 2? Isn’t cars competing like soccer players in Rocket League exciting? Surviving in the different modes of Fortnite is exhilarating. Video games are incredible!

Does gaming make you dumber?

Fun as they are, there’s a lot of talk about the bad effects of video games like violence, procrastination, and even issues with intelligence. But new findings prove otherwise.

Recent studies find no link between violent video games to aggression. As for putting off important tasks just to play games, it is found that there is no relationship between hours spent video gaming, procrastination, and delayed gratification. In fact, up-to-date studies still prove that we mostly play for entertainment, reward, or social reasons.

Gaming is even found to make you smarter! A 2020 study suggests that playing video games might make you better at learning, reasoning, and other cognitive skills.

This is all well and good, but as it may make you smarter cognitively, video games might also be outsmarting you.

The Business of Gaming

It’s all fun and games until you realize that, like any other industry, gaming’s objective is still to ultimately make a profit. As a global business, gaming is worth around $US175 billion, and three-quarters of that amount is generated from in-game purchases also known as microtransactions. As a new gamer, I’ve spent a lot of money on in-game purchases. It begins with the purchase of a console, then there’s the additional cost of buying your games. You’ll also need accessories (like controllers and protective cases). But during gameplay, that’s where the real spending begins.

What’s up for sale, you ask? Many small things, hence the term microtransactions. So what sounds like a small amount of money, initially, grows overtime, ultimately earning gaming companies billions of dollars each year.

In fact, the gaming industry is worth more than the music industry and Hollywood combined. That's how much money people are spending on games.

Games offer you the choice to give your character better powers or access to more levels or clues, which makes the game more enjoyable. You can customize your character’s outfit or armor, making them unique and even last longer in the game. While you play the game, you can also purchase special items, offering the secret reveal. The game offers to trade you a mere $2 for 5000 in-game currencies. And by the time you’ve almost finished your week of playing the game, you’re hooked! You don’t want your sessions to end just yet, so you download new challenges and unlock new adventures through microtransactions.

Spending on entertainment and achievement in the game is luring. I didn’t realise it at the time, but by the end of the first month of my new game, I ended up spending hundreds of dollars worth of microtransactions. Your mind tells you that you’re spending your money on something rewarding, useful, that you’re really going places. You can convince yourself that you’re collecting ‘assets’ and that your time spent playing is building something.

It’s almost an emotional experience like when you make a Buy Now, Pay Later (BNPL) transaction. You think you’re spending less than you actually are with BNPL since you’re paying in installments, much like converting small amounts of dollars into the game's fictional currencies. Without carefully calculating your expenses, you initially don’t work out that your accumulated purchases can add up to hundreds of dollars to your bills.

In the same way a door-to-door salesman offers you their products through different techniques, video games have different ways of selling their items to you.

How games sell to you

This is the most controversial type of microtransaction as it’s been linked to gambling. In loot boxing, you get a treasure box where you don't know what you’ll get. It’s thrilling and chilling at the same time, but gamers do it to gain items that will help them progress into the game.

Some games don’t need to be purchased. You just download them and voila! You’re ready to play. If this is the case, you have to remember that if a game is free, you are the product! As a matter of fact, 67 percent of all digital ad spend is for in-app mobile phone ads so you'll encounter a lot of ads in free-to-play mobile phone games.

They’re technically free, but they can also be likened to microtransactions since some ads offer you rewards when you engage with them. When you click on an ad, for example, you can get a prize—from power-ups, in-game currencies, or other items available through in-app purchases.

DLC or downloadable content is the most common way the gaming industry sells its items to you. In Super Smash Bros. Ultimate, for example, you can get DLC in the form of new challengers from different games like Minecraft, Final Fantasy 7, and Legend of Zelda. Costumes like outfits, armors, and helmets can be purchased for about a dollar. It’s not a huge investment in dollars or in-game play, but it makes your character more customised to your liking.

For games with grinding or repetitive play required to advance through the games, you can speed up processes by paying a price, hence ‘pay to win’. Animal Crossing is a good example of this since everything from bug-collecting, woodwork crafting, to getting fetch quests, can only be done in a limited number of hours. To progress faster in the game, you might want to perform a little microtransaction where you buy in-game currencies to move forward with the game. Although microtransactions can be dangerous because you might not be able to keep track of your purchases, the Interactive Games and Entertainment Association (IGEA) says that there are “tools for players to monitor or limit gameplay and in-game spending”.

Here are some of their suggestions:

As much as you can limit your in-game spending, sometimes some things just get through without you noticing. Don’t let the game play you!

For unexpected costs relating to playing a game, you can lodge your complaint through Handle My Complaint and we’ll ensure you follow the correct complaints process. Just say the magic words Help Me Handle It. Gamers and Video Games—Who’s playing whom?